OMG! Every bar sucked last night. San Antonio and San Diego the only ones that I don’t want to slit my throat over. Heading to San Antonio tomorrow for the 10 year anniversary party. Should be fun. I am hoping not so much fun that I need two days to recover.

We started a new program where I have to approve all new hires. Yesterday I received a picture of this girl from Nashville. Honestly she wasn’t very attractive. I asked the manager: “Does she have bartending experience?” No “Any serving experience at all?” No .” Personality?”  Shy. WHY THE FUCK would you send her information to get approval. I am no rocket scientist but it seems to me that she is not someone we would want to hire!!! Oy vay 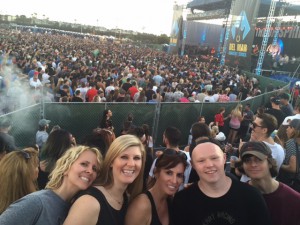 The Offspring concert at Del Mar Racetrack ! The kid, his friend ,Monique and Katy. Fabulous time!!!

The theatre that had the shooting last night in Lafayette , La was right around the corner from an old boyfriend’s  apartment. We would go there every once in a while. So scary

Except for Austin the bars rocked last night ! Monday night with huge numbers ! New Orleans finally showing some life. Bam ! I am sitting at the dock in Lake Arrowhead, Ca. Very peaceful . Jackson starts at Sanurai Pie today . Mac sent a text . ” Tell him to wear clothes he doesn’t care about because he will get dirty “.

The life of a dishwasher / garbage man.

” I am calling the animal control board.” This was the note I found yesterday on my door and on my car. I have gone out at night 3 times in the last 2 weeks. One time I was home by 7 pm, another 9:30, and yesterday 8:45. The neighbors on both sides o my house have parties literally every night but it’s my dog that seems to be bothering this woman. She actually opened my side gate and let my dog out. My dog could of gotten hit by a car. Some old couple found her and kept her overnight. HMMM Let’s see what happens.

Thank god San Antonio did well last night. Not a good month for SA in general.

Daniel is back! The harsh emails starting coming yesterday. They had a month of Tommy, nice and patient, now back to ” Let’s kick some ass and take names.” Different styles both great.

I went out with Pinky on Saturday and came to a huge disagreement with him. In his mind and the minds of other managers at other concepts , he likes to hire girls that have never bartended . The theory is that they can be molded better and it lessens chance of theft. Now the big problem with this is when we have a bar managed by a non bartender. I have seen the girls over the years lessen their bartending ability.  I think these non bartender managers will never have the ability to train the girls to be lightening fast. Perhaps the non female mangers  might have to take a few shifts at Chica Borraccha to learn some real bartending skills.

Jackson passed his AP French exam. Bam college credits and he only just finished his freshmen year. It’s as always a beautiful day in San Diego

Comicon wasn’t as lucrative as I was hoping. In fact it cost me quite a bit since my son went there every day. OK ready to get back to work.

Dinesti: I didn’t have my license on me so they impounded the Coyote truck. Oh brother.

” The bar slowed down when they started shooting.” That was in the Memphis log. But with no story. So who started shooting? and where exactly? Shocking that the bar died down after the shooting.lol

Another day in paradise. URGH! Nashville absolutely rocked this weekend. BAM! They blew every other bar out of the water.

“There was a hostage situation on Duval. A husband stabbed his wife and held his daughter hostage at gunpoint. I think that affected the night ” that was a side note on the Key West log.

Dinesti seems to love it there as she is now the acting GM in Key West. Everyone in corporate is crossing their fingers because that city seems to suck the life out of everyone.

Thanks to the universe today!!! My son got home today from his summer camp happy. I signed him up for a program that is from a company called NOLS. It’s similar to an outward bound program. Let’s just say that he wasn’t very happy about going. For the last two weeks I have tossed and turned worried that he was miserable.  Praying he wasn’t getting injured on this outdoor backpacking trip. My son’s dad has been mad at me because I pushed him to go. He arrived at the airport today and has been talking about his trip nonstop. Said it was the hardest thing he has ever done but he learned so much. I had no idea it was a course that was pass/fail. He passed. He learned Land Navigation and loves to navigate maps. He hungout with the emergency medic and learned about medical treatments.  They had to ration food and they learn how to cook for themselves. ” Mom my specialty was Pad Thai.” Well pad thai was noodles with peanut butter and butter.lol. I am so relieved. ( Didn’t shower for two weeks. Showed up with a mustache and a patchy beard. ) Literally wore the same clothes for two weeks. I had all his favorite foods made for him today. I am so so relieved. Comicon next week. San Diego bar get ready.