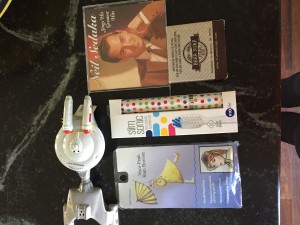 Thank you Jill. When my mother was alive she always sent crazy gifts for my birthday and Christmas . Of course she would first borrow money then purchase the crazy gifts . Jill decided to try and replicate my mother’s craziness . ” good try Jill !” I love the Star Trek magnetic salt and pepper shakers . And how I survived my life without the rain visor bonnet is beyond me! Lol

Happy birthday to me!! I woke up! That’s a good start . At my age waking up and being able to go to the bathroom without help is a true testament to a healthy life !

What great things am I doing on my birthday ? Well while I was mocking my exhusband for having to retake his road test in California I looked at my own license and realized it expired today . I now have to take the written test tomorrow at the DMV. I failed the first practice test . Oh brother

A lot going on in Coyote land . Justin possibly pulling several groups ; Montreal, Malta, London, and Wales. I love all those places .

This is the funniest commercial I have ever seen.  www.poopourri.com

Ha!  My ancestry.com DNA results came back. My son is very proud of being part Italian ( his dad’s side). Low and behold who is also Italian! Lol. So tonight for fun I made an italian meal and we joked about ” Our People”. Kind of crazy that they match your DNA with people in their database. Who knew I have a  few cousins in Naples, Italy.? A ton of 3rd cousins that I recognized from my mom’s Colombian side. And wow the name Escobar came up. ” Jackson guess what ? We aren’t just related to Colombian coffee pickers but we have a 3rd/4th cousin with the last name Escobar. If your going to be Colombian then why not be distantly related to the biggest drug cartel leader in history.”

Good news is that we signed the Ft Worth Lease. Hopefully this will be completely signed by both parties soon so we can start rolling!!! I woke up today in an awesome mood. I have since then F up emails. Broke some plates. Forgot about an eye appointment. Really I am Fucking things up right and left. And it’s only 10:30.

Cross fingers signing a new lease in Texas tomorrow!!!  In regards to an alternate   project, Lee and I are checking out a couple of spots in Los Angeles. That would be a great project , not far from home.

I received a message this morning from Jackson’s school saying that the school had been put on Police Lockdown. I was starting to freak out until I found out that someone was calling and issuing threats so they locked down 8 schools in the district. When Jackson got home he said that the rumor around school was that some kids called it in to get out of classes. Over 17 that could be a terrorist act. Might even be jail time. Not smart.

“An Egyptian billionaire’s offer to buy an island for refugees is closer to becoming reality.” Interesting story.
So I went out with Mac last night . First we ate a pound of red meat which he chased with Macallan 18 year and I chased with a bottle of red wine. Then we went back to the Coyote and drank Sake bombs. This morning I received an email from Mac asking if I liked one of the auditioning girls from last night? Really? I woke up today with a note to myself to watch a documentary recommended by Mac on The Bush’s ( Yup George Bush’s family) masterminding the Kennedy assassination. LOL.

My heart breaks for this woman. I did the Aloha Run this morning at Mission Bay Park. While I was running a woman was handing out flyers for her lost son. She was crying and most of the runners were just running past her.I stopped to look at the flyer because I could feel her terror. On my second loop I saw the police and life guards put up the crime scene tape. I knew that they had found the boy in the water. And from where they were stationed in the water I knew the boy was not alive. I am heart broken for their family.  http://abc7chicago.com/news/body-of-missing-4-year-old-boy-found-in-san-diego-bay/982945/ ( this says 11 am but the police definitely found him closer to 8- 8:30 am).

My gratitude tonight goes to my son and the happiness he has given me. The word Love isn’t big enough to explain what he does for me. 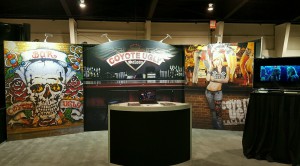 Went out with Dinesti and Levi last night. I miss Dinesti in San Diego. She is holding down the fort in Key West. I give her credit she is the only manager who seems to like it there. Most managers head there and within a month call Daniel begging to go back home. Paradise isn’t all it’s cracked up to be.

We had a conference call with our new franchise pr company. They gave us a questionnaire that we needed to answer. Justin and Lee with beautifully worded answers. What struck me was the various explanations of how we describe the bar Coyote Ugly. Their responses were on the lines of ” a great time. fun for both men and women.” My answer ” Cheers mixed with Dusk till Dawn without the nudity.” What’s the hottest thing that ever happened at Coyote Ugly? “Well if I could recreate some of my incredible sex moments in the NY walk in, pool table, electric bowling machine, oh the list goes on.” No Lil , something for customers. “Who said my partners weren’t customers?  ” NO staff you can’t sleep with the customers. Only I can!!” My 20s were awesome!!! It will be in my book when I write it.