Coyote Ugly–the rowdy, western-themed bar widely known for its beautiful female bartenders and dancers who have made pouring drinks an art form–has signed a franchise agreement for the development of its first bar in Kyrgyzstan. The new bar is expected to open in the capital city of Bishkek in September.

“Since launching our international franchise program last year, Coyote Ugly has made great strides in expanding to new markets across the world and this is another incredible milestone for the brand,” said Justin Livingston, Coyote Ugly’s Vice President of Global Development. “We’re incredibly excited about introducing our version of honky-tonk to Kyrgyzstan and look forward to working with our new franchise partners to grow their business.”

The new bar will be owned and operated by a group of bar and restaurant industry veterans led by Daniyar Monolbaev. Together, the group already owns four bars, one restaurant and a café in Bishkek, and will also be developing several Papa John’s franchises in the area over the next few years.

“Bishkek is a cosmopolitan capital city with a wide range of cafés, bars and nightclubs. Whatever type of bar or club you are looking for, you will find it in Kyrgyzstan,” said Monolbaev. “We’re long-time fans of Coyote Ugly and think the brand is a perfect fit for not only our bar portfolio, but also for those looking for a night out full of fun and unexpected antics.”

Widely recognized as the most famous bar on the planet, Coyote Ugly thrives on booze, bar dancing and girl power. Each night sexy, sassy, tough-talking “Coyotes” go well beyond serving drinks; they ascend the bar to entertain the crowd with choreographed dance routines, songs games, body shots and much more that celebrate the wild side of American culture. As for the drinks, the rule is hard-nosed: no “frou frou” shaken or stirred concoctions, and nothing that requires a blender or more than two ingredients to make.

Coyote Ugly’s expansion into the Kyrgyzstan comes on the heels of the company’s recent announcement to further expand its international footprint. With 21 locations already open and operating in four countries – United States, Russia, Ukraine and Germany – Coyote Ugly is focusing on aggressive franchise expansion in non-U.S. territories, including Australia, Canada, Japan, Mexico, South Africa and the United Kingdom, among others.

The company’s first international franchise agreement was signed earlier this year in Wales.

For more information about the Coyote Ugly franchise opportunity, visit www.coyoteuglysaloon.com/franchising or call (720) 442-7777. 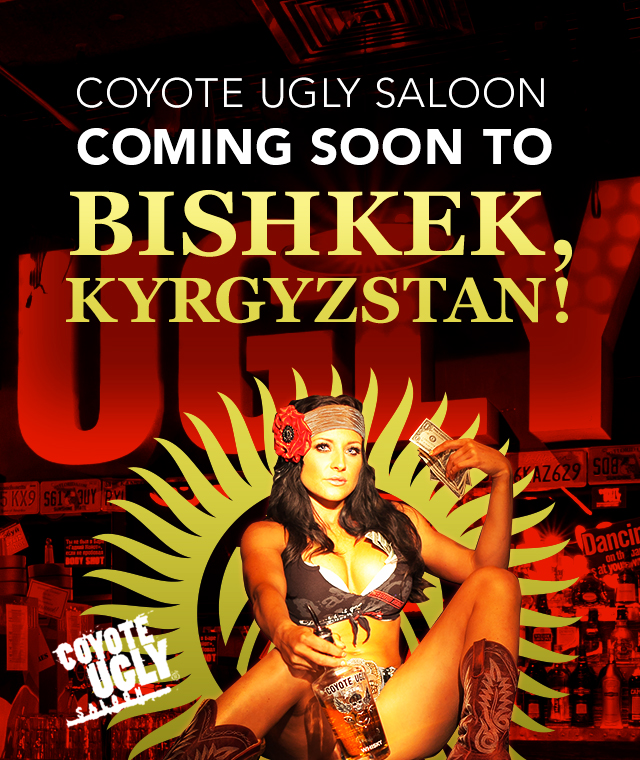